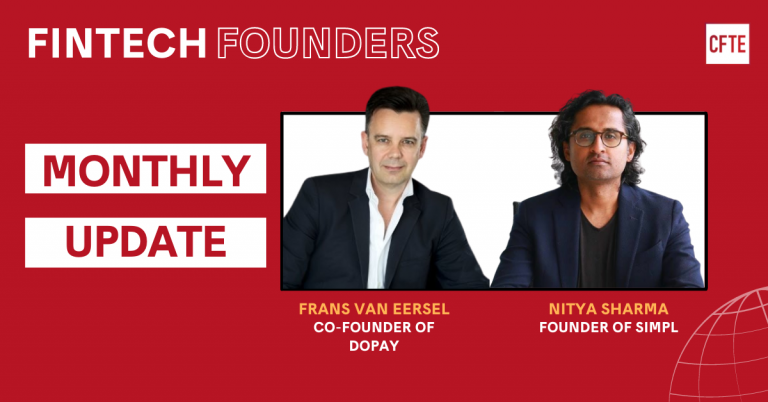 Time to catch up on what happened in the Middle East Africa South Asia (MEASA) region during the past month. Below are highlights of our latest Fintech Founders episodes hosted by Ronit & Gaurav and the latest funding-related news items from the region.

Quotable Quotes from our FinTech Founders

Helping 67% of Egyptians who are unbanked

Frans Van Eersel was our guest on episode three of the Fintech Founders Series and with his help we dived into the highly promising Egyptian Fintech market.

3 main points for those looking to better understand the Fintech scene in Egypt:

You can watch the sessions below on Youtube, or listen it on Apple and Spotify Podcasts.

How to build the next Visa?

Nitya Sharma joined us on episode four and told us the story of how Simpl was built and the vision and execution it was built on:

You can watch the sessions below on Youtube, or listen it on Apple and Spotify Podcasts.

What happened in Fintech last month in the MEASA region

In case you missed it, here are some of the movers and shakers that made the news in the FinTech MENSA World. Egypt, UAE, Bahrain, Pakistan, South Africa and India have witnessed a lot of seed funding rounds which underlines the promising expansion plans for Fintech hubs in the region.

South Africa-headquartered AI-based banking-as-a-service platform Jumo has raised $120 million from new and existing backers. After this round, the total of Jumo’s funding raised around $200 million.

ClearTax, India-based Fintech SaaS company has raised US$75 million in a Series C funding round in order to apply the company’s expansion plan to the Middle East.

UAE-based personal finance and investment platform Sarwa has officially launched Sarwa Trade platform, which lets users trade stocks and ETFs with no commission and international transfer fees. In addition, this launch of Sarwa Trade followed after a US$15 million Series B funding round in August 2021.

Tag, the Pakistan-based Fintech has raised more than $12M in its latest funding round.

CoinMENA, the Bahrain-headquartered crypto trading platform has raised US$9.5 million in its first seed funding round.

Udhaar Book, the Pakistan-based MSME-focused cash flow management platform has raised $6 million in seed funding round to digitise credit in all of the retail shops located in Pakistan.

Sayvour, the popular Pakistan-based Fintech platform has raised $3.3 million in its latest seed funding round.

The first UAE-based open finance platform Fintech Galaxy has raised $2 million in its seed funding round.

Fawry, the Egypt-based Fintech giant and E-payment solution provider has successfully managed to acquire shares in Brimore which is a social commerce marketplace, and it is valued at $1 million.

We hope you enjoyed the last 2 Fintech founders episode with us and that you are excited for the the next to come!

Join us in the next sessions