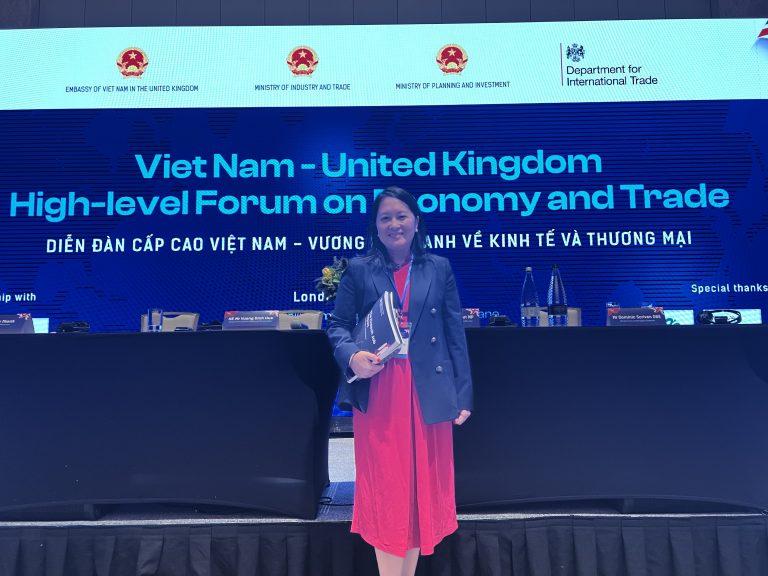 On 29th June 2022, CFTE is honoured to have attended the Vietnam – United Kingdom High-level Forum on Economy and Trade at the invitation of H.E. Nguyen Hoang Long, Ambassador of Vietnam to the UK. The event had the presence of notable attendees including H.E. Vuong Dinh Hue, Chairman of the National Assembly of Vietnam, Vietnamese Deputy Prime Minister Le Van Thanh, Britain Secretary of State for International Trade Anne-Marie Trevelyan and MP Graham Stuart, UK Prime Minister’s Trade Envoy to Vietnam. Talks from distinguished guests highlighted the strong economic, investment and trade cooperation between the two countries with the potential for more, and the Vietnamese government’s priorities for the upcoming future.

During the event, deputy Prime Minister Le Van Thanh addressed the significant progress seen in Vietnam-UK’s strategic partnership that could be further strengthened through the UK-Vietnam Free Trade Agreement (UKVFTA). He expressed his wish for the two countries to create more favourable trading conditions for both Vietnamese and British enterprises and to strive towards a trade value of US$10 billion by 2023.

Climate commitments made by Vietnam at the COP26 were reiterated at the event, with the government calling for support from the UK government and large British businesses to increase investment in Vietnam’s digital transformation and human resources. Thanh promised the government will create a more favourable business environment for British firms to invest in Vietnam, particularly in areas of green growth, digital transformation, processing-manufacturing, finance, banking, education-training, innovation and pharmaceuticals.

From the British side, the UK Secretary of State for International Trade Anne-Marie Trevelyan made high remarks about the country, stating Vietnam could be among the top 30 economies worldwide by the end of the decade. Vietnam has high ambitions, exemplified by the tremendous growth in its GDP at around 6% annually. Going forward, the country has a lot of potential which could be exploited through attracting more foreign investments and promoting two-way trade and investment.

Vietnam’s Priorities for the Future

Also highlighted in the event were Vietnam’s various development priorities for the upcoming future:

Vietnam’s focus on embracing Fintech is especially relevant to CFTE, and we look forward to engaging in initiatives aiming to promote Fintech education among the youth and working professionals. Digital financial literacy is imperative to develop adequate tech-savvy human resources which will better prepare the country for digitalisation and digital transformation. Teaching digital skills early to the youth also encourages more local Fintech businesses to arise along with painting the country as an attractive destination for international Fintech companies.

This important event was very insightful for us to learn about the huge economic opportunities that are presented in Vietnam for UK businesses. It excites us to see Vietnam so eager and ambitious to build a world-class digital economy, starting from promoting and investing in Fintech. We at CFTE have high hopes for a potential collaboration with the Vietnamese government to deliver financial literacy and upskilling programmes that could help the country foster its next generation of digital innovators.