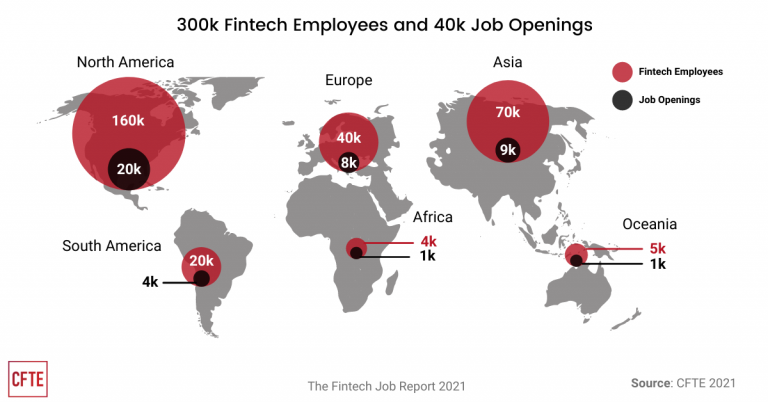 With its rapid growth in recent years, Fintech has become a major employer in the Finance industry. Our analysis of the top 225 Fintech Unicorns (companies whose valuation exceeds $1 billion) shows that currently, the industry has over 300,000 employees worldwide and is looking to employ on average 40,000 people each quarter.

Given the fact that the US is a big hot spot for Fintech, it is unsurprising that North America is the biggest employer in the industry. Specifically, the region currently employs more than 50% of the Fintech workforce – 160,000,  and accounts for 50% of the job postings – 20,000. The most prominent employers in North America are Visa (US), Mastercardc (US), Ally Financial (US) and Square (US).

Asia is the 2nd largest Fintech employer in the world, accounting for 70k of the employers in Fintech and 9k job postings. The industry is booming in many countries such as Singapore, Indonesia or Malaysia, however, the biggest source of employment in Asia predominantly comes from China and India. Ant Financial (China), Tencent (China), Vendantu (India) or Policybazaar (India)  are among the biggest employers in Fintech.

Europe employs 40k people and is looking to employ 8k more each quarter, making it the 3rd biggest Fintech employer in the world. With London being the home to some of the world’s leading Financial Institutions, it is no wonder that the city has become a superhub of Fintech activities. Revolut or Checkout.com are some of the biggest employers. Outside of the UK, UiPath (Romania) or Klarna (Sweden) are also some of the most notable players on the Fintech job market.

The Fintech industry is growing in South America, specifically in countries like Brazil, making it the 4th largest employer in the industry. Currently, we estimate that the continent employs over 20k people and has 4k Fintech job postings. Challenger bank Nubank (Brazil) or SaaS provider StoneCo (Brazil) are the biggest employers on the market.

With only two countries, Oceania is the 5th biggest Fintech employer in the world. The continent employs over 5k people and has 1k job postings each quarter. Fintech startups such as Xero (New Zealand) or Airwallex (Australia) are major sources of employment.

Fintech has been gaining a lot of traction in Africa as well, however, the industry hasn’t quite reached its maturity yet, making it the 6th biggest employer in the world. Some of the most prominent employers are Wave (Senegal) and Flutterwave (Nigeria).

Currently, the continent employs 4k people and has 1k job postings. Proportionately, this is the largest employee to job posting ratio worldwide, which suggests that despite being one of the smallest employers, the Fintech workforce in Africa is growing at an exponential rate.

The fact that Fintech has grown rapidly has had an impact not only on the evolution of Finance as we know it, but also on the employability and career aspect of the industry. Fintechs are growing at a tremendous rate so naturally, they need people.

To put things into perspective: traditional financial services in London currently employ 400k people, Fintech 300k, however, Fintech is employing at a much faster rate – 4x more to be exact. Each quarter, Fintech hires 40,000 people in comparison to London’s 10,000.